Lucid And Rivian are Giving Tesla a Run for its Money

Emerging electric car start-ups in the United States up the ante in EV sector for Tesla.

September 2021, is proving to be an interesting checkers’ game for the electric mobility sector and the transient American dream run for Tesla. Americans who banked only on one choice among electric carmakers in Tesla are now spoilt with choice as the dice rolls.

Emerging electric car start-ups in the United States have shown they are able to compete with the best and one is making an impressive claim.

In its infancy most electric cars were compromised by sub-300 kilometers range and extremely sparse charging infrastructure. However, the new entrant in the market have successfully addressed this driving concerns by introducing better in-car technology and access to charging points.

The car that broke all previous records

Built to take on premium models such as Tesla Model S and Porsche Taycan Turbo, the Lucid’s top model has been officially rated by the US Environmental Protection Agency (EPA) for clocking 837 km on a single charge, significantly more than the 652 kilometers claimed by Tesla’s Model S Long Range.

As with the Tesla and Taycan, the Lucid is a big car with big power. The version with the longest range makes a stout 696kW – more than triple that of a regular prestige sedan – while the fastest version has a shocking 828kW of power.

Rivian enters the market in style with its fully-loaded pickup

If Lucid has been taking on range, it is Rivian that is leading the race in segment with its new offering which is a pickup truck.

Both these companies have linked arms with big corporates, unlike Tesla which has always positioned itself as an insurgent meant to upend traditional automakers.

Rivian is well anchored with funding from companies like Ford and Amazon. To top this Amazon put in an order for 100,000 delivery vans, to be shipped in stages through 2030. 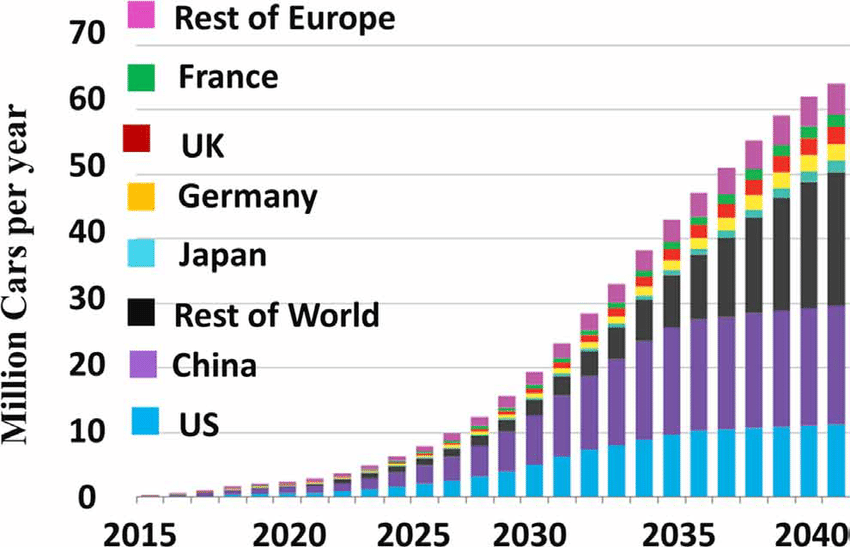 North America is estimated to reach $194.20 billion by 2027, at a significant CAGR of 27.5 percent. Asia-Pacific and Europe collectively accounted for around 74.8 percent share in 2019, with the former constituting around 52.3 percent share.

North America and Europe are expected to witness considerable CAGRs of 27.5 percent and 25.3 percent, respectively, during the forecast period. The cumulative share of these two segments was 40.1 percent in 2019, and is anticipated to reach 51.0 percent by 2027.